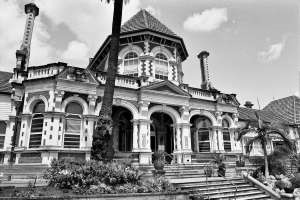 As Somerville House celebrates the historic milestone of 120 years this month, we congratulate the visionaries and forward-thinking educators both past and present for their vision in educating young women.

To celebrate, here’s a little bit of history about how the name Somerville House came to be and how they came to be at Cumbooquepa perched high over South Brisbane.

In 1910, Miss Constance Harker and Miss Majorie Jarrett took control at co-Principals of the Brisbane High School for Girls that was established by Miss Fewings in 1899 in Wickham Terrace in Brisbane.

By 1917, the cost of further expanding the school became too much for the co-Principals and they offered the school to the Methodist Church. They had secured a lease with an option to buy at their location in Wickham Terrace but could not afford the full purchase price.

At the same time, the Presbyterian Church was considering purchasing Clayfield College. Following negotiations between forward-thinking elders of the two churches, they agreed to form an ecumenical joint mission in secondary education to jointly and equally purchase the two schools. In 1918, the PMSA was established and took over ownership of the two Brisbane schools.

Only a year later, the girls’ school’s lease was expiring and negotiations to purchase the Wickham Terrace property were unsuccessful. With time running out, the PMSA explored alternative locations and settled on Miss Harker’s and Miss Jarrett’s preferred option of Cumbooquepa at South Brisbane.

Owned and built by the Stephens family, the imposing architecturally-designed building was named in recognition of the indigenous name for waterholes behind the house. With the purchase secured, the school moved in time to open for the 1920 year.

When the school reopened in their new home, it was renamed Somerville House after trail-blazing English scientist Mary Somerville. The new name was deemed necessary to prevent confusion and distinguish it from the Brisbane State High School which was to be built in nearby Vulture Street and opened in 1921.